The AIM Institute > Blog > Dan Adams interviews Scott Burleson about his new book, The Statue in the Stone

Dan Adams interviews Scott Burleson about his new book, The Statue in the Stone 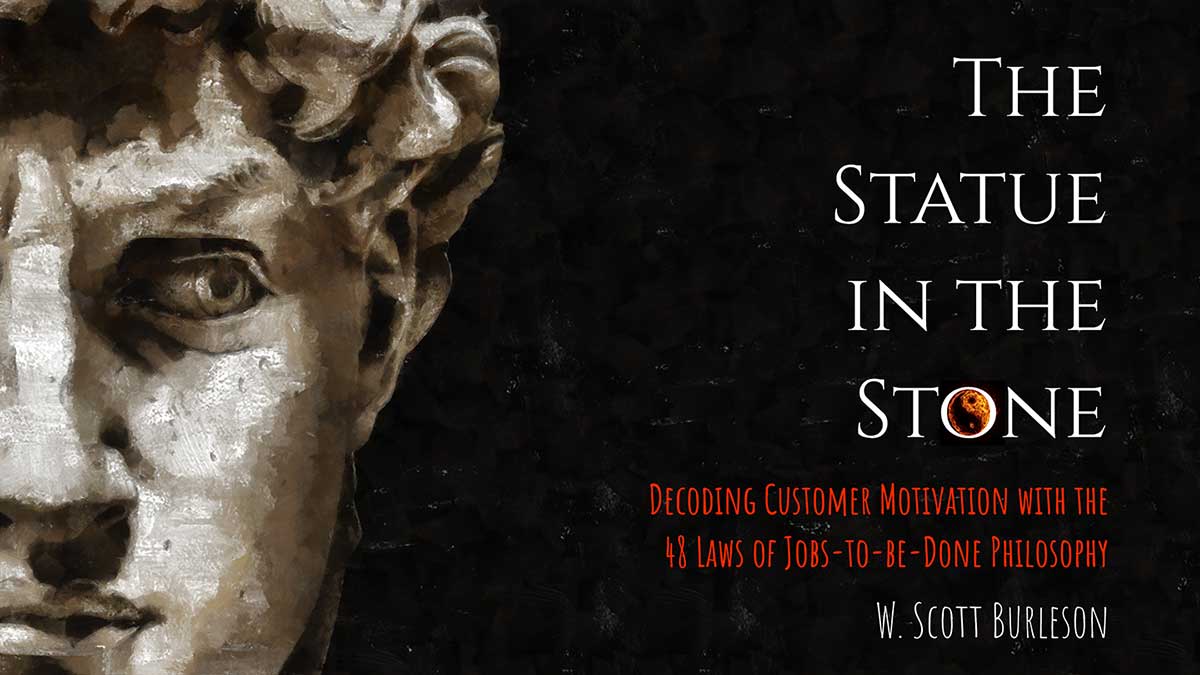 Dan Adams: Congratulations! How long have you been working on this project?

Scott Burleson: Thanks! I started working on a book  about 14 years ago. It was originally going to be a comprehensive guide for product managers. But the deeper I went, the more that I realized that my true passion was much more about customer motivation and decision making. However, I kept going– boring myself to tears about, for example, product roadmaps. I finally had to admit that if it was boring to me, then it would probably be boring to others. But I kept going anyway.

Until, I finally had a breakthrough.

Dan Adams: What was the breakthrough?

Scott Burleson: A friend of mine, Dr. Andrew DiMeo, was a professor in a joint graduate program between the University of North Carolina and North Carolina State University. I had been giving a couple lectures per year in his courses. One day, after a session, we were chatting and he said, “We should write a book together. Something like the Zen of Motorcycle Maintenance, but for customer needs.”

I immediately not only knew that he was correct, but I knew what was wrong with my current book direction. It covered so many topics – when my interests and expertise were really deep in this one specific area, customer motivation.

I was interested in both theory and practice.  There’s almost a spiritual element to writing a customer need statement. You’re channeling the customer’s mind. What makes them happy, peaceful, fearful or nervous. They hire products to help them with their objectives.  And here, we have the perfect framework to bind them all, Jobs-to-be-done thinking.

Read an excerpt from The Statue in the Stone

Dan Adams: What did you do with this revelation?

Scott Burleson: I threw out everything that didn’t fit into the narrower scope of Jobs-to-be-done thinking. From that point, it was a relatively short three years to completion. But I never looked back.

You’re intentional about this idea of a “philosophy.” Tell me about that.

Scott Burleson: True!  I do use this word “philosophy.” That’s actually just one example of the many words I needed to adopt. This book became a quest for precision in names, ideas, and models.

Dan Adams: What’s another example of a word that survived your torturing?

Scott Burleson: I needed a name for a job-to-be-done, executed perfectly. I called it the “perfectus.” Which is Latin for “perfectly achieved.” It was actually kind of fun – to realize that there was an important concept for which no word existed. And then to create one.

Dan Adams:  How about the origin of the title, “The Statue and the Stone”?

Scott Burleson: It’s a metaphor for Law #2 of JTBD philosophy which is “To make something perfect, you must remove everything that makes it imperfect.”

It’s from a story, probably apocryphal, about Michelangelo and Pope Julius. Supposedly, upon seeing the statue of David for the first time, the pope asked Michelangelo, “How did you create something so perfect?”  And the master’s reply was, “I saw David in the stone, and I just chiseled away everything that was not David.”

From there, I wanted a simple statement that summarizes the JTBD philosophy. I called it “The Maxim of Jobs-to-be-Done Philosophy.”

It goes as follows:

to help a person

to accomplish a job

Perfection is achieved by removing, not by adding. If someone will remember this story, and this maxim, then all the 48 laws of JTBD philosophy will neatly stack into place.

Dan Adams: How did you originally come across this thesis?

Scott Burleson: I wish that I could say that I thought of it myself! But, it’s from something that Tony Ulwick told me, back when I used to work for him. He was referring to his own applied process for jobs-to-be-done, Outcome-Driven Innovation. He said that the purpose of ODI was to help a customer to accomplish a job perfectly. I really have to give Tony so much credit. Those words were like a seed planted in my brain, and this book is what grew from it… after a short 10 years!

Dan Adams: How can The Statue in the Stone help practitioners of New Product Blueprinting?

Scott Burleson: It will help them many ways, but a couple big ones come to mind. First, almost every project team has difficulty during Blueprinting’s Step 1, in which they are trying to identify a market segment to target. Jobs-to-be-done is the best framework that I know of to describe a market as well as a segment. It provides additional structure for Step 1.

Dan Adams: Indeed! And if a scope is well-written in Step 1, then the project team is off to a great start! What else?

Scott Burleson:  It will help them write their customer outcome statements. Of course, we teach this within the New Product Blueprinting course, but with The Statue in the Stone, we go deeper. It not only provides the rules, but the reasons for the rules, the neuroscience background, and the basics of human decision-making. It’s theory plus practice. Blueprinting is wide, covering many topics. Conversely, this is narrow – going deep into just one concept. That concept is customer motivation as framed by jobs-to-be-done. With this background, most should find it easy to write excellent outcome statements.

Dan Adams: With a well-written scope, and well-written outcome statements from customers, a New Product Blueprinting project is basically guaranteed to succeed. What else should folks know about The Statue in the Stone?

Scott Burleson: Just one thing. In all honesty, very few of the ideas within this book originated from me. In addition to Tony Ulwick, the other big concepts come from Lance Bettencourt, Clayton Christensen and Theodore Levitt. Plus, a host of others who figured out something equally important if not more so, like how to put this into practice! Dan Adams, for example!

I scoured the world for the top expert in each sub-area of jobs-to-be-done, and you are alone, without question, as the world’s foremost expert in B2B innovation.  People should know that – and I’m not bashful in saying it. Early in this book, I take a bit of time to give credit to all the folks who’ve contributed to this field. I like to say that others created the pieces and my contribution was assembling the puzzle.

Dan Adams: Well, that’s certainly kind of you! And congrats on the book. I look forward to our wonderful clients discovering it as a natural complement to New Product Blueprinting!